Methamphetamine, also known as meth is a street drug which can cause serious health problems, not only for your body but also your mouth and teeth.  A person which uses methamphetamine is known as a “meth mouth” because the use of such a drug results in stained, blackened, broken or even rotting teeth.  A study done by the Journal of American Dental Association found the 96% of 571 methamphetamine users had tooth decay and 31% were missing 6 or more teeth.

How can meth damage your teeth?

There are several ways meth can damage your teeth such as

Xerostomia: This is a stimulant which can cause dry mouth and will reduce the saliva protecting your teeth

Lack of dental hygiene: A meth high can last up to 12 house in which most users do not practice good dental hygiene such as flossing or brushing which can then lead to the sugary substances staying on their teeth for long periods of time.

Poor Diet: While under the influence, meth users often crave sugary foods due to withdrawals which are extremely bad for you teeth.

Can meth mouth be treated?

Unfortunately due the effects of meth the damage that is done to the teeth is irreversible. It causes the teeth to decay so much that they cannot be saved and must be pulled. For users that have used it for much longer might have to spend thousands in order to fix the damage of meth.  Those who haven’t used for a long time might be able to walk away with fillings and crowns.

Fluorosis is a condition which affects your tooth enamel. It is caused by excessive amount of fluoride during the first 8 years which is the time the more permanent teeth are formed.  Teeth affected by fluorosis come appear to be discoloured and can be laced with white markings however more server cases can have stains which range from yellow to dark brown or noticeable pits on the tooth.  While fluorosis is not a disease it can be difficult to treat. 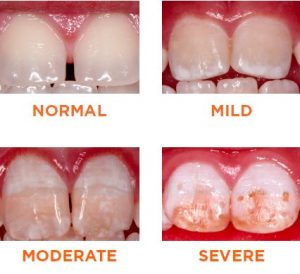 The biggest cause of fluorosis is inappropriate use of the fluoride. Some children like the taste of toothpaste and may swallow it instead of spitting it out.  Other ways this could happen would be taking a higher than normal amount of fluoride supplement during early childhood.  Parental vigilance is the key to preventing fluorosis. It’s not necessary to monitor their water and food as they get low levels of fluoride from this however parents should try and ensure they do not swallow the toothpaste.  Another way to make sure they don’t use too much fluoride would be to use less toothpaste depending on their age.

What is an Abscess?

A dental abscess is an upsurge of pus that forms inside the gums or teeth. This is usually caused by an infection. There are two different areas in which the abscess can form. The first one happens at the top of the root which is called a periaphical (Per-e-AP-ih-kul) and the second abscess can occur in the gums at the side of the tooth root which is called a (per-e-o-DON-tul).  Either can occur when there is a dental decay, an injury or prior dental work

What do dentists do to treat an Abscess?

Unfortunately an abscess won’t disappear without treatment; even if the abscess were to rupture you will still need treatment.  A dentist will treat the area or tooth by getting rid of the infection by draining the pus. In some cases the tooth can be saved by doing a root canal treatment but if the infection is too large it may need to be extracted.  Leaving an abscess untreated can lead to serious complications in the future. An abscess can spread to your jaw and other areas of your neck and head if it is left untreated. 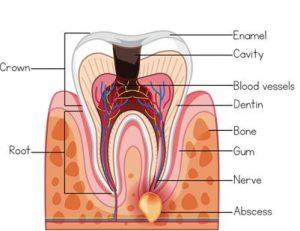 Some symptoms of a tooth abscess are:

What can you do to prevent an abscess?

In order to prevent a tooth abscess, you would need to prevent decay. Taking care of your teeth by

Dental decay is one of the biggest preventable non-communicable disease that can be easily preventable.